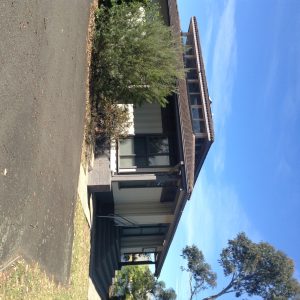 As usual, the communion season in Sydney began with a service on Thursday morning. The text was from Exodus 5:2: “And Pharaoh said, Who is the Lord, that I should obey his voice to let Israel go? I know not the Lord, neither will I let Israel go”. Here we have a king of Egypt, who knew not Joseph, nor regarded the God of Joseph. His ignorance of God was great, yet he was not ashamed to own that. Sadly, many in our day are not ashamed of their ignorance of the God of the Bible. Coupled with his ignorance, was disobedience to the will of God. The Lord’s servants expressed that will to him, yet he would not yield. Lastly, we noted his stubbornness in continuing in sinful rebellion. We could see lessons here for ourselves in this spiritually dark day.

On Thursday evening, the minister preached from Genesis 6:5 on the wickedness that God saw in the days of Noah. His three points were, The Demonstration of Sin, The Depth of Sin and the Dreadfulness of Sin. The question for ourselves being – do we view sin as a dreadful evil? In due time the judgment of God came, and only those in the Ark survived the fearful overthrow, so must we be in Christ, the Saviour of sinners, and such as by faith are found in Him shall be saved.

On Friday evening the subject was that of self-examination. This is of course, a most needful duty for all who prepare to sit at the Lord’s Table. We were led to consider Romans 7 especially verse 16: “If then I do that which I would not, I consent unto the law that it is good”. The Apostle Paul found a struggle with sin. The Old Man would not give way with ease. But in all his struggles against sin, Paul was acknowledging that God’s just demands were right and proper – the law was good.

On Saturday morning we considered a “Loyal Profession of Love to King David”. A gentile believer, Ittai the Gittite, made this profession. The text was found in 2 Samuel 15:21. Here we find David fleeing from his rebellious son Absalom. What a dark day! At such a time as this, Ittai, a Philistine by birth and nation, was challenged. He had begun to follow David, but would he continue, even when David and his cause seemed low? By the grace of God, this man made confession of David as his king even at this time! He raised a God-honouring witness on the side of the King. So too, the Christian is called to follow his Master. And Jesus would have His people to partake of His Supper.

On the Communion Sabbath morning, we were encouraged to consider the suitability of the Great High Priest – the Lord Jesus Christ. In Hebrews 5:5-10 we see: The Appointment of Christ, The Obedience of Christ and the Perfection of Christ. The One appointed did the work. He cried from the Cross –“It is finished.” One word in the Greek – Finished! Following the Fencing of the Lord’s Table, where more particular guidance was given as to the marks of those who should come to the Lord’s Table, as well as those who ought not, the Sacrament of the Lord’s Supper was again held in our congregation. A witness was again raised on the side of Christ in Riverstone, NSW, Australia.

In the evening we looked at the very wonderful case of the healing of the noblemen’s son – John 4:46-54. Here was a particular and pressing request made by the nobleman to Jesus. His son was at the point of death – would Jesus come down and heal him? The Saviour responded with a general caution, “Except ye see signs and wonders, ye will not believe”. How many are indeed looking for some remarkable religious experience of this sort or that, but neglecting the simple words of Christ? This man did believe the word of Jesus, and as he returned so believing, he was met with the wonderful news – “Thy son liveth”. His son was whole again. Best of all – “Himself believed, and his whole house”. As an old missionary on Skye is reported as having said – “Faith is the emptiness of the soul coming to the fullness of Christ”. As with the nobleman – it shall not be disappointed!

On Monday a service of thanksgiving was held. We had much to be thankful for, given the Lord’s kindness in giving us His Word and Sacrament. The preaching was from the encouraging words in Isaiah 60:22: “A little one shall become a thousand, and a small one a strong nation: I the LORD will hasten it in his time”. This is one of the texts of Scripture that point to days of gospel blessing yet to be seen on the earth. The cause of God may go very low, as it did in Noah’s day, but He is able to revive His own work and grant great increase. May we never limit the Lord.

So, we had an encouraging and spiritually profitable communion. Such a time upon the earth is a precious foretaste of heaven to the Lord’s people. “And the ransomed of the Lord shall return, and come to Zion with songs and everlasting joy upon their heads: they shall obtain joy and gladness, and sorrow and sighing shall flee away” (Isaiah 35:10).

This site uses cookies to improve your experience. Read more.