Following the Assembly of 1893, services were held in the Blythswood Halls in the city centre with 300 people attending, mostly from the Mains Street (Gaelic) Free Church. Shortly thereafter a church belonging to an evangelical episcopalian congregation, St Jude’s, 278 West George Street, became vacant and was rented by the congregation and subsequently purchased and renovated. 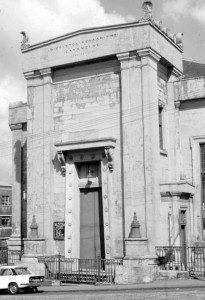 In November 1893 Neil Cameron, Divinity Student, was placed in charge of the congregation.  He was licensed to preach on 9 December 1895 and on 9 January 1896 he was ordained and inducted to the charge, the call being signed by 730 people. Rev. Neil Cameron remained minister of St Jude’s for 36 years until his death, aged 77, on 9 March 1932.

During the early part of the century there was a considerable influx of people from the Highlands to Glasgow and the congregation grew considerably.

Rev. Roderick MacKenzie (1864-1958) was inducted in December 1932 but after 12 years, he resigned on the grounds of ill health.  He had had a difference of opinion with the Synod and in 1945 a large section of the congregation who sympathised with his position began to hold separate services in another building in the city. Mr MacKenzie ministered to these people until his death. By this move, the St Jude’s congregation was much reduced in size.

Rev. Donald Maclean (1915–2010), was translated from Portree to Glasgow in June 1960.  Mr Maclean had been baptised in St Jude’s by Rev. Neil Cameron and became a communicant member there in 1937.  After 39 years’ ministry in St Jude’s Mr Maclean resigned in 2000 due to deteriorating eyesight.

In June 1975 the congregation moved from the building in Blythswood Square to 133 Woodlands Road.

Rev. Roderick Macleod, the current minister, was translated to Glasgow from Tarbert, North Harris   in October 2001.

In 1852 Rev. J.R. Anderson and most of his congregation, including more than 200 communicants, separated from the Free Church, and built the John Knox Tabernacle on Margaret Street in the Gorbals. Mr Anderson ministered there until his death at the age of 56, following which his elders continued to hold services, reading his sermons to the congregation. In 1895 the congregation applied to be received into the Free Presbyterian Church.  Rev. N. Cameron preached the first sermon from the words: “Feed thy people with thy rod, the flock of thine heritage, which dwell solitary in the wood, in the midst of Carmel: let them feed in Bashan and Gilead, as in the days of old” (Micah 7:14).

Following the death of Mr Sinclair it was agreed that services in John Knox’s, then being held in a hall in 2 Calton Place, should cease and the members and adherents be received into St Jude’s congregation.