Home / History / History of the Free Presbyterian Church of Scotland

Since 1893, the Free Presbyterian Church has endeavoured to uphold the full reformed position, not only in Scotland but in England and other parts of the world. The twentieth century saw immense changes in the professing Christian Church, which was overrun with liberalism and error, but the Free Presbyterian Church has sought to maintain the same scriptural doctrine, worship, and practice that she inherited in 1893. Her position is essentially that of John Knox and the Scottish Reformed Church of 1560, which in turn was essentially the position of the Apostolic Church at the day of Pentecost. 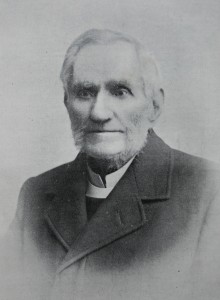 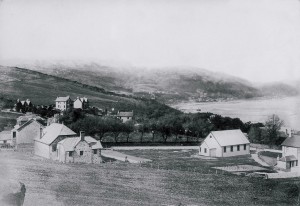 During this period there was rapid expansion from the original number of two ministers who had almost no material resources to call upon in establishing the Church. The number of places of worship increased from 26 in March 1894 to 53 in March 1895 to 70 in March 1896. By 1918 the denomination had twenty ministers. It was a time when the Church needed to give a strong note of protest against compromise with Romanism in national life and against Sabbath desecration. 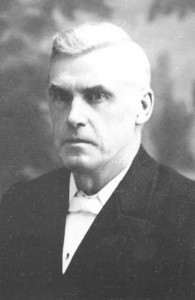 One reason was that, although the Free Church repealed the Declaratory Act in 1906, it stated in doing so that it had ‘always adhered’ to the Confession of Faith. This statement was erroneous and condemned the position of the Free Presbyterian Church in 1893 as schismatic; and the refusal to remove this false statement fixed the two Churches in their separate positions.

Another reason was the failure to discipline the Free Church Divinity professor, William Menzies Alexander, who had recently published a semi-heretical work on Demonic Possession in the New Testament. 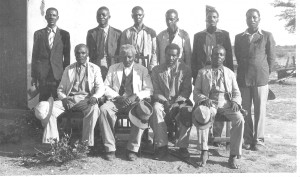 Elders and deacons in Zimbabwe 1949

The Zimbabwe (Rhodesia) mission arose from a remarkable providence in Edinburgh which brought a young African, John Radasi, into contact with the nascent Free Presbyterian Church. Mr Radasi became a divinity student in September 1896 and was ordained to the work of the Rhodesia mission in 1904. The Zimbabwe mission has continued to the present day. 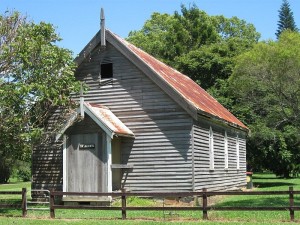 The old church at Brushgrove, Australia 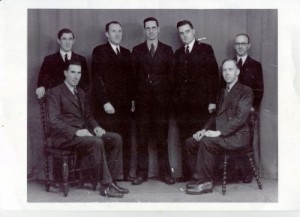 Glasgow prayer meeting in the 1930s (Revs W. Maclean, A. McPherson, and D. Maclean are in the centre)

The Free Presbyterian Church of Scotland continued the struggle to maintain a distinctive witness to the Word of God and the Reformed faith in a period of declension and compromise. One area where the Church raised a vital witness was in maintaining faithful adherence to the Fourth Commandment. In 1921 the Synod passed a resolution confirming its former position that Church privileges such as Baptism were not to be given to those who engaged in Sabbath work (other than works of necessity and mercy) or to those who travel by trains or buses run in systematic disregard of the Lord’s Day. This led to a prolonged dispute with Rev. William Matheson, minister of Chesley, Ontario, who separated with his congregation in 1930.

The faithful exercise of scriptural discipline within the Church of God was a prominent concern during this period. While the Free Presbyterian Church suffered on this account, it remained steadfast in seeking to honour God in this matter. In 1933 the editor of the Free Presbyterian Magazine wrote: “We have no reason to be proud of ourselves as Free Presbyterians but neither have we cause to be ashamed of the truths we stand for.” Reformed truth was asserted and maintained and a firm witness given against those who sought to undermine the sovereignty of God in salvation through an Arminian presentation of the gospel.

From the 1960s onwards in western nations the flood gates opened to an increasing tide of immorality and apostasy from the Word of God. There was a related decline in vital godliness and attachment to the truth of Scripture as expressed in the Westminster Confession of Faith within the professing Church. This necessitated the continued clear separate position of the Free Presbyterian Church.

The Church has been called to witness against a false ecumenical spirit. In 1989, a number of Free Presbyterian ministers and their followers separated from the Church to form the Associated Presbyterian Churches. The catalyst for the separation was three disputed cases of discipline, the main one being the suspension of the Lord Chancellor, Lord Mackay of Clashfern, from the eldership for attending the Roman Catholic funeral mass of a fellow judge. A number of congregations were lost to the Church as a result, and others severely depleted.

It is more vital than ever to maintain the testimony raised in 1893 in a time when there has been considerable alteration of principles among various other Churches. The Free Presbyterian Church seeks to continue the biblical principles of the Church in Scotland in her better days to be ‘Reformed in Doctrine, Worship, and Practice’.