It does not seem long ago since the 30th anniversary of the New International Version (NIV). Therefore it seems strange to see its 50th anniversary announced so quickly.  Actually this is an anniversary of the commissioning rather than the production of this version. It is yet another marketing initiative in the attempt to address the declining popularity of this version. Formerly enthusiastic friends have forsaken the NIV and are now championing other versions with equal fervour. 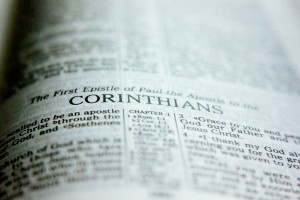 Perhaps those behind the NIV wish to make the version appear older and thus more reliable than it is. In truth, the version is being changed so frequently that it is difficult to keep track. A vast array of editions are targeted at different “consumers”. This is openly acknowledged by the secular publishing house that generates the NIV for its financial profit. The NIV Brand Manager’s job description requires him/her to “create understanding of unmet consumer needs and help to identify opportunities for new product development”.

It does not concern the NIV  publishers whether Bibles are simply bought rather than read, or whether saturation point is anything more than a marketing problem. That the authority of God’s Word is weakened and cheapened by their approach is irrelevant to them. Even among those professing themselves to be Christians, few seem scandalised by such blasphemy.

The influence of the NIV has been disastrous in popularising “dynamic equivalence” translation rather than word for word translation. Dynamic equivalence means that the translators give you their opinion of what the biblical text intends to say rather than the words themselves. It is not difficult to see that this is effectively rewriting Scripture. The effect of this is to undermine the doctrine that every word is inspired by God.

Through 133 inaccurate footnotes, the NIV undermines confidence in the original text of Scripture by casting doubts on verses that were still included in its main text. Its footnotes also helped in the movement to discard the biblical requirement of female headcovering in public worship.

This article from the Trinitarian Bible Society shows in greater detail the extent to which this version  is entirely unacceptable.

The history of the NIV is one of failure in far too many respects. It can be summed up as: failure to treat the Word of God as the Word of God. This is ironic because its Preface asserted that the translators were committed to the conviction that the Bible is God’s Word in written form. Yet its whole approach to the Bible reveals a lack of conviction in the inherent authority and power of the Word of God.

One key area in which the NIV has failed is in communication. It was intended to communicate afresh in the idiom of modern readers and avoid the need for them to spend time and effort in understanding the Bible. No version has managed successfully even to identify contemporary idiom. Clearly none of the vast array of available versions has achieved this, since the stream of new improved “more contemporary than ever” versions continues to flow, rising to a deluge.

Those of us who were regrettably brought up with both the Authorised Version and the NIV during childhood find that we can remember nothing whatsoever of the memory verses we were taught from the NIV. One has said, “It  has no memorable expressions, nothing that lingers in the mind. This is a serious problem for the NIV that is not always acknowledged.” On the other hand, the AV is supremely memorable.

William Gurnall  once said: “Bless God for the translation of the Scriptures. The Word is our sword; by being translated, the sword is drawn out of its scabbard.” The sad truth of the legacy of the NIV is one of reshaping that sword into an altogether different – and blunt –  instrument on the anvil of carnal preference.

The purpose of God in delivering the Bible to the Church is utterly undermined by the multiplication of translations in the same language. English-speaking churches and believers need one accurate, standard translation that they can appeal to and share as the fixed rule of faith of the true religion.

The FP Synod Resolution on Versions of the Bible of 1981 (renewed in 2015) was far-sighted in anticipating the effects of modern versions. This resolution predicted that modern versions would undermine the inspiration and authority of the Word of God, reduce memorisation, facilitate division and false teaching and above all dishonour God.

None of the emerging versions have surpassed the AV in its accuracy. Indeed, they fall far short. The AV is a reliable translation which opens up the original to English speakers. We need only one such translation.

The purity of God’s Word is a matter of great personal importance for us. “Every word of God is pure: He is a shield unto them that put their trust in Him. Add thou not unto His words, lest He reprove thee, and thou be found a liar” (Prov. 30:-6-7). “Thy word is very pure: therefore thy servant loveth it” (Ps. 119:140).