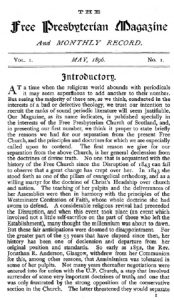 The first Free Presbyterian Magazine, published in May 1896, is now available in PDF format at this link. More than 120 years old, it is of historical interest obviously. But also it is full of spiritually profitable material for today, and we could not recommend it more highly.

Our hope is that other early issues of the magazine will appear on the website over coming months. The whole first year of the magazine in a bound volume is available from the FP Bookroom, as are other early volumes. These old paths are the good way indeed. “Thus saith the Lord, Stand ye in the ways, and see, and ask for the old paths, where is the good way, and walk therein, and ye shall find rest for your souls” ( Jer 6:16).