Home / Articles / The Pagan Origin of “Christmas” – a Reminder

“Christmas” was originally a heathen festival celebrated on the 25th of December in honour of the birth of Tammuz (Ezek. 8:14), also called Baal the Sun-god, the son of Semiramis, the Babylonian queen of heaven. The celebrations included hymn-singing in the street, riotous merry-making, feasting, drunkenness and the giving of gifts. Among the Romans these pagan ceremonies, known as the Saturnalia, were held in honour of the victory of Sol Invictus (the unconquerable Sun-god), over the darkness at the winter solstice. The Sun-god in the Saturnalia ceremonies was likened to a small child. . . This pagan festival was taken over by the Church of Rome in the fourth century to commemorate the birth of Christ. The name “Christmas” is a combination of the name of Christ and the word “mass” – the Roman Catholic mass.

Not only Christmas as a whole but also the festivities associated with it are of pagan origin. Instead of the child Sol Invictus, there is the popular Christmas crib with a doll as the Child Jesus. What a flagrant flouting of the Second Commandment! How awful the blasphemy in representing the eternal God in human nature as a doll! How idolatrous and worthless the religion that has a doll for its god! “We ought not to think that the Godhead is like unto gold, or silver or stone, graven by art and man’s device” (Acts 17:29).

The decorating of an evergreen tree was part of the worship of Tammuz or Baal, the Sun-god of ancient Babylon. Through the Church of Rome – the Babylon of the Apocalypse – this act of Baal-worship has been handed down through the centuries. Deluded Protestants, by setting up Christmas trees in their homes, schools and churches, are guilty before God of upholding and perpetuating a practice peculiar to the worship of Baal. How can anything connected with the worship of Baal be pleasing to the Lord? Was it not for countenancing such worship that the judgments of the Lord repeatedly fell upon the people of Israel of old? (See 1 Samuel 12:9,10).

The Madonna and Child on Christmas cards and stamps is just Semiramis, the Babylonian queen of heaven and her son Tammuz, adopted by the Church of Rome to represent the Virgin Mary and her Son Jesus. “The Babylonians in their popular religion,” wrote Rev. Alex. Hislop in The Two Babylons, “supremely worshipped a Goddess Mother and a son, who was represented in pictures and images as an infant or child in his mother’s arms. . . .”

How dishonouring to the Saviour to have the purpose of His birth into this world darkened by rites and ceremonies belonging to the idolatrous worship of Baal! “But I say unto you, that the things which the Gentiles worship, they sacrifice to devils and not to God, and I would not that ye should have fellowship with devils” (1 Cor. 10:20). We have no warrant whatsoever from the Word of God for observing Christmas. The only warrant that can be advanced is the warrant of the Pope. At the Reformation our godly Reformers cast out Christmas, Lent and Easter along with the rest of the abominations of Rome. They acted on the Scriptural principle: “What thing soever I command you, observe to do it: thou shalt not add thereto nor diminish from it.” (Deut. 12:32). “All worshipping or honouring or other service invented by the brain of men in the religion of God,” wrote John Knox, “without His own express command, is idolatry.” God said of Israel, “In vain they do worship Me teaching for doctrines the commandments of men” (Mark 7:9).

How sad in this degenerate age of widespread apostasy to see professing Christians bowing at the pagan and popish shrine of Christmas! How guilty are parents, who are under solemn obligations to bring up their children in the nurture and admonition of the Lord, when they lead them into these heathenish customs! “For thus saith the Lord, Learn not the way of the heathen . . . for the customs of the people are vain” (Jer. 10:1-3).

Seek to honour Christ according to His Word as our godly forefathers did. Have nothing to do with Christmas parties, Christmas trees, Christmas gifts, the selling or sending of Christmas cards or Christmas stamps. Avoid as you would the plague the Christmas Eve Midnight Service and the Christmas Crib. They all point to Rome. The observance of Christmas is largely responsible for the subtle infiltration and advancement of Popery with its blasphemous worship and veneration of the Virgin Mary. Anew we are confronted with the question, “How long halt ye between two opinions? If the Lord be God, follow Him: but if Baal, then follow him.” (1 Kings 18:21). May it be ours to say in truth, “I have refrained my feet from every evil way that I might keep Thy Word.” (Psalm 119:101). 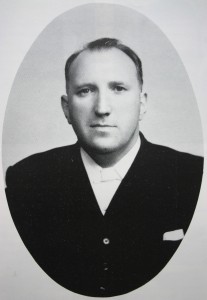 [Edited extract from Westminster Standard Publication No. 24, Easter, Lent, Christmas and the Cross, available from the FP Bookroom, Glasgow. Printed in the December 1999 issue of The Free Presbyterian Magazine. Rev. William MacLean (1907-85) became the minister of the Free Presbyterian congregation in Ness, in the Island of Lewis in 1948. He was translated to the Gisborne congregation in New Zealand in 1962, to the Grafton congregation in Australia in 1973, and inducted again to the Ness congregation in 1976, where he remained until his death. Under the pen-name of Ergatees he wrote Arminianism – Another Gospel; Christ or Antichrist – Facts for Enquirers; and several other useful pamphlets, published by Westminster Standard Publications. His obituary may be found in The Free Presbyterian Magazine, Vol. 90, No.12, December 1985, page 378.]