Home / About Us / Who We Are / The Free Presbyterian Church Catechism 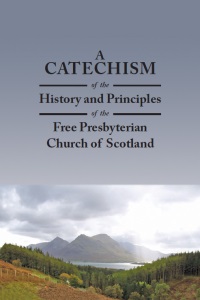 The use of catechisms for teaching doctrine is well established in the history of the Reformed Churches. The Scottish Church has preserved in use the Westminster Larger and Shorter Catechisms as constitutional documents of primary importance in disseminating her teaching. Catechisms explaining historical and constitutional principles have been less common, but this present one is not the first.

In 1847 the Free Church General Assembly published a Catechism on the Principles and Constitution of the Free Church of Scotland prepared by Rev. Andrew Gray of Perth. In 1876, in the preface to a second edition of this extensive work, Rev. James Begg lamented the fact that it had “fallen into comparative obscurity and neglect”. Endorsing the Assembly’s recommendation of the Catechism as “a valuable summary of this Church’s history and exhibition of her distinctive principles”, Dr Begg considered the necessity of such a document to be every bit as urgent in his own day as when it had first appeared.

It is with similar sentiments that this new edition of the Catechism of the History and Principles of the Free Presbyterian Church of Scotland is published. At the 1937 Free Presbyterian Synod, Rev. James Macleod strongly urged “the necessity of instructing our young people in the principles of our Church.” He argued that “our young people have had the Free Presbyterian Church held up to ridicule before them in certain quarters and that it was needful that the young would know the history of our Church and the reasons which justified our position.” This desire was realised in the preparation of a catechism which originally appeared in the Young People’s Magazine during 1942-3.

The catechism was to be the work of many hands and there was a considerable delay in its appearance. The first Committee, appointed in 1937, consisted of Rev. Donald Beaton and Rev. James Macleod, and it was they who undertook the main bulk of the composition. In 1938 the Committee was enlarged to include Revs Donald Beaton, D.A. Macfarlane, D.M. Macleod, D.M. Macdonald, and Mr James Fraser. The following year Rev. Donald Beaton left the Committee on account of an intended overseas visit and was replaced by Dr John M. Johnston. In 1940, a fresh Committee consisting of Rev. D.J. Matheson, Rev. R.R. Sinclair, and Mr Finlay Beaton was appointed to prepare the catechism for the Young People’s Magazine. After a further delay at the 1941 Synod, the Catechism finally appeared in serialised form between August 1942 and October 1943 under the title Catechism of the Free Presbyterian Church Principles for Young People.

The present edition of the Catechism has arisen from a similar desire on the part of the Religion and Morals Committee to provide younger people with full and clear teaching on the distinctive testimony of the Free Presbyterian Church. The Catechism has been revised and updated in several respects. Some of the original questions have been joined together, while others have been divided so that the answers can stand by themselves as statements of truth. Additional questions have been introduced to explain important points more fully. Several issues covered in the original, such as religious movements which have become defunct, are no longer relevant; while modern errors which had not arisen at the time of the original are now addressed – for example, the Charismatic movement. The questions have been grouped in sections for quick reference and for ease of use. The original notes and scripture proofs have largely been retained but many additional references have been included.

Not everything that makes the Free Presbyterian Church distinctive is included in this Catechism. The aim has been to address matters relating to the constitution and principles of the Church without extending the treatment of these matters beyond what was originally intended.

It is the fervent hope of the Committee that this new edition of the Catechism will receive wide circulation and that many in the present generation, and in future generations, will come to value the principles that it embodies. “We will not hide them from their children, shewing to the generation to come the praises of the Lord, and his strength, and his wonderful works that he hath done” (Ps. 78:4).

Printed copies of the Free Presbyterian Catechism may be obtained free of charge from the Church’s Bookshop.