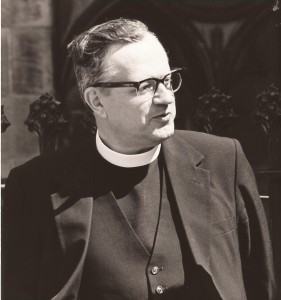 It was with a sense of great sadness, and of loss for the Church in Scotland and beyond, that we heard, on 20 September 2011, the news of Rev Hugh Cartwright’s passing, after a brief illness, to his eternal rest. Hugh MacLean Cartwright, the eldest son of godly parents Thomas and Margaret Cartwright (nee MacLean), was born on 22 October 1943 in Motherwell, Lanarkshire, where his father was serving as a sergeant in the Royal Artillery.

At the end of the war the family lived for a short time near his mother’s home in Dores, Inverness-shire, before moving to Kennoway, Fife, where young Hugh’s education began. In 1956, when he was about 13, the Cartwrights returned to Inverness-shire, where the rest of his early education took place, first at Glen Urquhart Secondary School, near where his parents resided, and then, from the age of 15, at Inverness Royal Academy.

Although Mr Cartwright did not speak much about those early years of his life, it would appear from his comment at the General Assembly of the Free Church in 1997 that it was in 1955, as he put it, “grace enabled me to entrust myself to Christ”. It was probably not too long after this that Mr Cartwright began to have thoughts about the gospel ministry for, when we follow his career after his secondary education, we find him embarking on six further years of study, three at the University of Aberdeen, where he took his MA degree in 1966, and then three more at the Free Church College, Edinburgh. On completion of his studies, Mr Cartwright was ordained and inducted to the pastoral charge of Ferintosh Free Church in the Black Isle, where he faithfully laboured for 21 years, assisted by his like-minded, devoted wife Mina Mackintosh, whom he married on 4 July 1969, shortly before his induction. These were happy years and the writer has fond memories of four years under a rich ministry, as well as of much kindness, encouragement and hospitality in the Ferintosh manse.

In 1990, when the need of a professor to fill the vacant Chair of Church History and Church Principles arose at the Free Church College, Mr Cartwright’s abilities and gifts were recognised and he was duly appointed. Three years later he was appointed to the further position of Assistant Clerk to the General Assembly. Everything would suggest that Mr Cartwright enjoyed those early years in the College, and his high-quality teaching and warm pastoral care were much appreciated by the students. As time went by, however, his position as a professor proved difficult, as Mr Cartwright felt obliged to support the investigation of allegations made regarding the moral conduct of one of his fellow professors. This stand resulted in him being censured by the General Assembly and removed from committees within the Free Church.

In 1998, with no end to the worsening crisis in the Free Church in sight, Mr Cartwright resigned his Chair and applied to the Free Presbyterian Church to be received as a minister. While, no doubt, there were some who thought that Mr Cartwright’s leaving the Free Church and entering the Free Presbyterian Church was simply his getting away from the difficult position he was in, we do not believe that this was the case; nor do we believe that he ever regretted the decision which he took. In a letter of February 1998 to the writer, which I am sure he would not mind me quoting, Mr Cartwright states, “In God’s providence the Free Presbyterian Church has been freed from the elements which were unhappy with her position and I hope that her unqualified subscription will provide a rallying ground for others. The Formula is identical. The only additional question relates to approval of the 1893 Deed of Separation. 105 years on, looking at it in the light of the situation in the Free Church today, I find it reflecting my own attitude to those in charge of the judicatories of the Free Church today, and have come to the solemn conclusion that, for me, the time to take this step has come.”

Mr Cartwright was warmly welcomed by the Free Presbyterian Church and was inducted to the vacant congregation in Gilmore Place, Edinburgh, later in 1998. The respect with which he was regarded within our Church was reflected by his appointment as Theological Tutor in Greek and New Testament, in 2000. He also became a regular contributor of articles to The Free Presbyterian Magazine. Although Mr Cartwright did not naturally possess a strong voice, his sermons were most carefully and thoughtfully constructed and relied for their force on the clear argument and warm experimental content of the message. Such a ministry was greatly appreciated in Edinburgh and in the wider Church, and under this ministry – along with warm pastoral care – his congregation in Gilmore Place, which was largely made up of young people, almost trebled in size.

On 22 September, 2007 a shadow was cast over Mr Cartwright’s life in the sudden and unexpected death of his beloved wife Mina. In a letter written shortly afterwards he writes of the great support Mina had been to him throughout his ministry. He also spoke of his congregation as having “enveloped me in love and prayer”. This love continued to be shown in the years that followed, when every Sabbath evening the young people would gather at his manse for fellowship. Despite his handicap, which became increasingly difficult latterly (in infancy he suffered from polio, which left him being semi-crippled all his life), Mr Cartwright continued to assist at communion seasons throughout the bounds of the Church.

He assisted in Dingwall on the first Sabbath of August 2011, and it was only on phoning him after his return to Edinburgh that the writer gathered that there was a serious health problem. Mr Cartwright managed to take the services in his own congregation on August 14. In the evening he preached on the words of Elijah in 1 Kings 18:21: “How long halt ye between two opinions?” and concluded with the urgent command of God to repent. This was to be his last sermon.

Soon afterwards he was admitted to hospital, where his condition rapidly worsened until, on September 20, he departed to enjoy the rest that remains for the people of God. On September 28 a large number from all parts and all denominations gathered in Edinburgh to the funeral, where the grief that was evident reflected the fact that many felt they had lost, not just a minister, but a true friend and brother in the Lord. “Help, Lord, for the godly man ceaseth; for the faithful fail from among the children of men” (Ps 12:1).

[This obituary was originally printed in the February 2012 issue of the Free Presbyterian Magazine.]