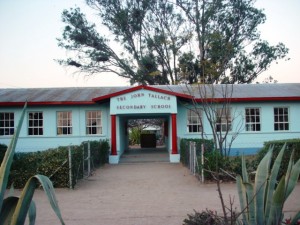 John Tallach High School is a boarding school with over 600 pupils of which about 50 live locally. It is located in a rural community 40 km outside Bulawayo. Its academic record speaks for itself: in 2013 it had a 96.15%  ‘O’ level pass rate coming top in Matabeleland and taking 4th place nationally. The school’s headmaster is Mr B Ncube whose late father was an elder in the Mbuma congregation. Mr Ncube is assisted by his deputy Miss Norma Maclean, and a number of government teachers. 2013 saw the first ‘A’ Level results, and a 100% overall pass rate was achieved.

Pupils come from a wide variety of religious and economic backgrounds. Some come from Free Presbyterian Church homes while others are Seventh Day Adventist, Pentecostal or Roman Catholic, for example. Many have a mixture of Christianity and the witchcraft and ancestor worship which is prevalent in rural areas. This means there is a continual stream of questions from pupils which demand scriptural answers: When did God change the fourth commandment saying we should keep the first day of the week as Sabbath? Why do you not speak in tongues when Paul said “forbid not to speak in tongues”? What about miracles? Sadly and more seriously most churches teach that Jesus died for everyone: a doctrine which turns the Saviour into “another Jesus” and is part of “another gospel” (2 Cor. 11:4).

The school day starts with breakfast at 6 am at the dining hall. This is immediately followed by worship. Classrooms are then swept before assembly at 6:45 am in summer and 7:20 am in winter. Assembly starts with the singing of two verses from a psalm, led by a prefect, followed by the prayer and any announcements for the day. There are eight 40 minute lessons before lunch with a 30 minute interval after period four. After lunch pupils do some manual work, typically raking paths or cutting grass or lifting litter. Unlike in Europe, these jobs are done by pupils rather than groundsmen. Afternoon studies start at 3 pm and last for two hours. Some practical subjects are arranged in the afternoon due to timetabling constraints. Day pupils go home after this study session. After dinner boarding pupils return to school for and hour and a half of evening studies which finish at 8 pm. By 9 o’clock lights are out in the dormitories. On Friday evening pupils have an evening off from studies and do a variety of activities. Friday afternoon and Saturdays are free with nothing timetabled.

At 9 am on the Lord’s Day pupils gather for Sabbath school which usually lasts an hour. It starts with family worship, after which the school splits into four groups with over 100 in each class. Pupils learn the Westminster Shorter Catechism and a verse from a Psalm or a passage of Scripture. The first service starts at 11:30 am. Because most people in the local congregation travel on foot, the second service starts after an hour’s break. There is a third service at 6 pm which is attended only by school pupils.

Religious education is an important part of the timetable. The Zimbabwean Religious Studies ‘O’ level course is excellent. It is probably the best course of its type in the world because it sticks very closely to the text of the Bible. In forms 3 and 4 the pupils study Luke and Acts in detail, normally covering one chapter a week. During forms 1 and 2 pupils study Genesis, the first part of Exodus and Mark. All pupils in the school receive Bible instruction on 4 out of 5 days during the school week.  Worship is held twice daily and all the children do the Church’s Scripture and Catechism exercises. 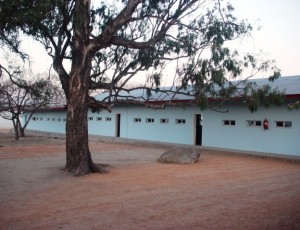 To keep school fees as affordable as possible food and boarding accommodation is basic by western standards. Isitshwala is the staple food which is a porridge made from maize. It is eaten soft, with sugar, for breakfast and harder with milk, vegetables or meat for other meals. The school has its own herd of cattle which provide a large percentage of the meat consumed at the dining hall. It is important to realise that many of the things that are taken for granted in Europe are considered optional extras or even luxuries in Zimbabwe. For example, there are large numbers of children in some dormitories, pupils have to hand wash their own clothes and clean classrooms.

Being in the southern hemisphere winter is in the middle of the year. There is very little if any rain between May and October, but during the rest of the year there are frequent thundry downpours. Here it promises rather than threatens rain! At 1300 metres above sea level temperatures don’t go too high and peak at 36 degrees in October, before the summer rains bring the temperatures down.

It doesn’t take long for things which appear strange and usual to a visitor to become normal everyday things. Once of the most striking features of the local Ndebele language is clicks. A click is a sound made by putting your tongue onto the top of your mouth and releasing it in such a way that it makes a click. The letters c, q and x are different clicks, made by putting your tongue on different parts of your palette. Another thing is that only main roads are tarred, the rest are dust roads which quickly become corrugated. If you imagine driving across corrugated iron, then you will have a pretty good idea of what driving on these roads is like.

More information on John Tallach High School can be found in the annual Synod Reports.

Contact can be made with the School by this email address: [email protected]